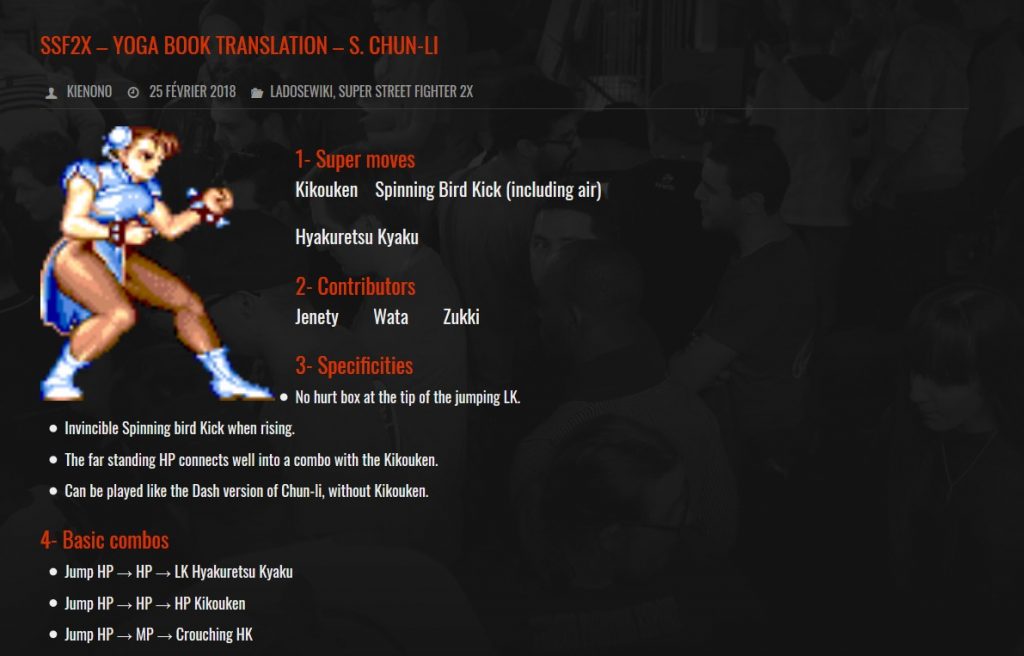 S. Chun-li doesn’t have the Senretsu Kyaku but she’s got a strong stepping back LP Kikouken, a strong neck breaker and a unique Spinning Bird Kick that knocks down on hit. She also proposes a variety of jumping attacks, especially with her jumping LK which has no hurtbox on the tip.

It is essential to understand the following 4 distances:

Mastering the 4 distances above is essential to press efficiently your opponent. #2 is used to crush the opponent’s attacks or as a diversion. From this distance, you can also connect a throw, a Hyakuretsu Kyaku a crouching HK or a jump-in prediction of a projectile.

#3 is used to intercept your opponent in its jump with a Spinning Bird Kick but be careful of no using it at the wrong time since you’ll get seriously punished.

Since the close MK starts 3 frames slower than for X. Chun-li, use the close MP or one of the jumping K attacks (with really good hurtbox properties) for anti-air. This can also be used when you’ve cornered your opponent to one end of the stage, in order to prevent him from escaping. By combining this with triangle jumps, it’s possible to secure your position with relatively low risk.

Throwing LP Kikouken when stepping back is a strong barrier option.

Finally you dare to do so, you can also give up on using the Kikouken and use your character as the Dash version (you’ll still keep a strong knocking down Spinning Bird Kick).

If your opponent is waiting for you to move, you won’t get you any good opportunities to deliver damages. Once you’ve let pass a jump-in from your opponent, you don’t have much way to escape, except waiting a mistake from your opponent. So take your distance, bait your opponent with some Kikoukens and catch his jump-in with a jumping LK or a standing MK. If you’ve kept your charge, a Spinning Bird Kick can also take a Condor Dive down. You can then follow with a neck breaker. When cornered, you might be tempted to try escaping with a Spinning Bird Kick, a Hyakuretsu Kyaku or a neck breaker but just wait for a mistake from your opponent. Generally, you’d want to fight a close range with S. Chun-li. Unfortunately, X. T Hawk is the opponent you cannot do so.

If your opponent is in a waiting stance, you will be blocked by MP claws or Scarlet Terrors and won’t be able to cause much damage. However, you should restrain from moving too much forward. Long range Flying Barcelona can be taken down with jumping LK. Use Spinning Bird Kicks for Okizeme. However, if it doesn’t hit, you’re pretty sure to get punished with a HP. The jumping LK can be intercepted by a Scarlet Terror so you don’t even think of jumping attacks. If you’re low on HP and that your opponent is just waiting, step forward progressively with some Hyakuretsu Kyaku and close the distance. When you manage to get to a corner of the stage, aim for damages with throws, Hyakuretsu Kyaku, crouching MK and crouching HK.

Can be used against, among others, Hadouken (including Shinku), Kikouken, Sonic Boom, Air Slasher, Yoga Fire, Shouryuken, Zutsuki (and also Oni Musou), Psycho Crusher and Rolling Attack. However, the LK version is difficult due to the severe timing required.